Amber Heard On Verge Of Tears As Johnny Depp Reacts To Secretly Recorded Video Of His Violent Kitchen Rampage – CelebrityGossipNow.com
Skip to content 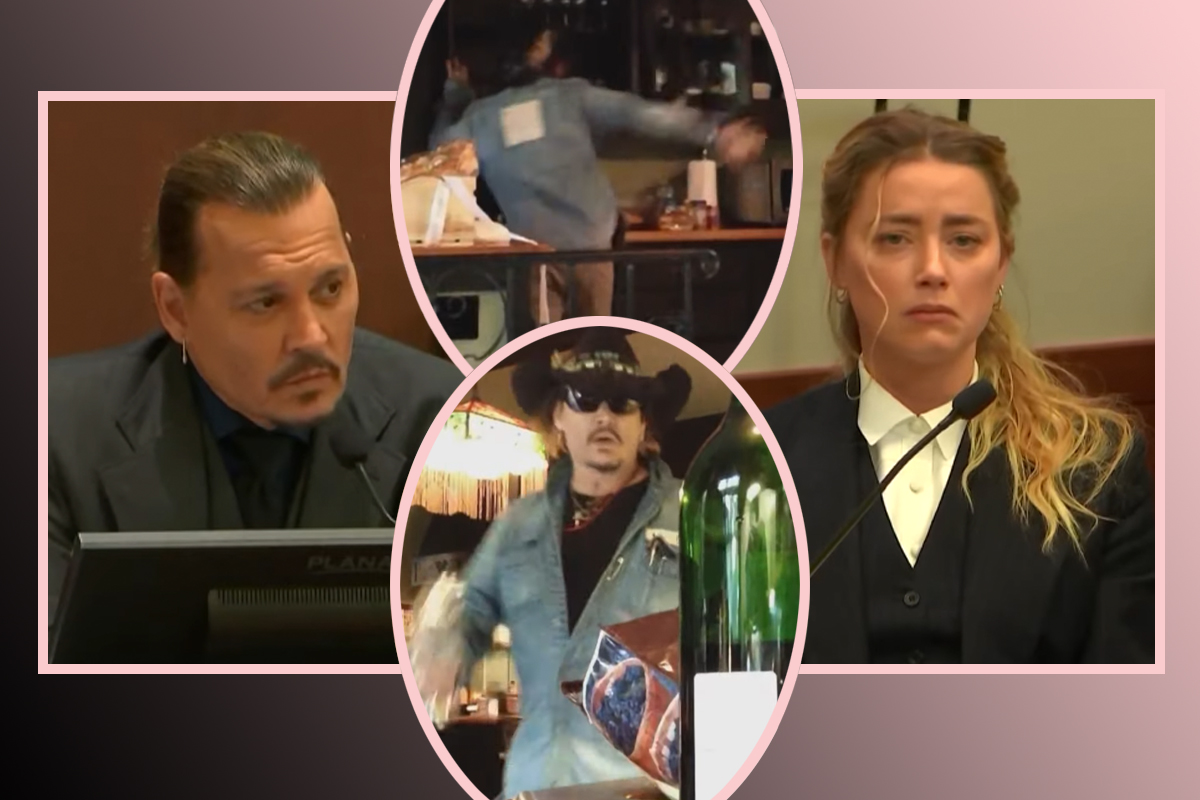 The messiest breakup of all time continued to play out in front of the public on Thursday via the ongoing defamation trial. For those not keeping up, Johnny Depp is suing Amber Heard over her description of him as an abusive husband in a Washington Post op-ed. He’s trying to prove she was lying, something she can disprove by showing him to be an abuser. In a way, Johnny is the one on trial – as the loss of his libel trial resulted in him immediately losing his role in the Fantastic Beasts films. And it’s only going to get worse if he loses this one.

Right now is his crucible as he’s being cross-examined by his ex’s legal team. They’ve brought out the receipts to try to convince the jury he’s a violent man. First there were some gross text messages he sent friends. While they weren’t admissions of abuse – nothing like the recordings of Amber admitting to “hitting” Johnny – they certainly didn’t look good.

This is far, far worse.

Related: Johnny Claims Amber Heard Would Threaten To Kill Herself If He Left!

Amber’s attorneys showed a video that first got out way back in 2016, in which Johnny goes on a rampage, smashing glass cabinets while yelling, “Motherf**ker!”

In the video, which she attempted to secretly record, even hiding the phone from Johnny with her own cup at one point, Amber asks Johnny what’s wrong, saying:

“Nothing happened this morning, you know that?”

“Nothing happened to YOU.”

“I just woke up and you were so sweet and nice. We’re not even fighting this morning. All I did was say sorry.”

“You want to see crazy, I’ll show you crazy.”

And pours himself a massive glass of wine. Then he finally sees the phone and snatches it, saying:

He then takes and tosses the phone or something, it’s difficult to tell for sure. But it’s clear he’s furious that she’s secretly recording him. She retrieves the phone and can be heard chuckling before the recording ends. It’s a huge contrast to her face in the courtroom as the video played; her chin trembled with sadness as she looked on the edge of tears.

You can see the rampage (below) starting at about the 0:30 second mark:

After the video finished, Amber’s attorney asked to play it again, to which Johnny responded:

When asked if he was being “violent” in the clip, he answered:

“Clearly I was having a bad time. I don’t know what it was with regards to completely at this time as I don’t know the date, but, um, being illegally recorded by your chosen other is quite fitting with the rest of the photographs and tape recordings.”

“She tried to hide it from me and laughed and smiled at the end. That was the most interesting part, myself.”

“I did assault a couple of cabinets, but I did not touch Miss Heard. As I think you can see.”

Heard’s attorney asked Johnny next if he was drunk in the video; Johnny allowed:

“There’s a possibility of that, yes sir.”

When the lawyer pointed out he could be seen pouring “a mega pint of red wine” in the video, Johnny clarified:

“A mega pint? I poured myself a large glass of wine. I thought it necessary.”

After looking through some previous testimony about the video, the attorney asked if he was “very, very upset” in the video, which Johnny admitted was “pretty clear.”

The attorney changed tactics then and asked:

To which Johnny responded:

At that comment, Amber’s frown dropped, replaced with a look of disbelief. Her attorney then asked about Johnny’s earlier claim of trying to hold his behavior to the “standards of a Southern gentleman,” to which Johnny answered:

“I don’t know about anyone else but I’ve had experiences where one does stray from complete control over their emotions at times, and that is a very normal, primal thing to do.”

“I did not try to intimidate Miss Heard. If she was intimidated, why was she filming? If she was scared to death, why didn’t she leave?”

Amber’s team certainly got their point across, evidence that he had a violent temper – despite his testimony that he didn’t. Of course, we’ve heard other evidence of that as well, with his nurse testifying that she saw him kick in a door in his trailer out of anger. Does it prove he was abusive or that he would actually enact such violence onto another person’s body? We’ll have to see what the jury thinks.

One thing is for sure, BOTH of these people look far, far better when they know they’re being recorded versus when they don’t. Maybe in the end the only answer will be that it took two to keep this extremely toxic relationship going? What will the ruling be then??

What do YOU think, Perezcious paralegals??