At 40, ‘Poltergeist’ Makes for a Haunted House That Hurts – CelebrityGossipNow.com
Skip to content

With a monstrous legacy, we revisit the tactility of the film’s poltergeist activity. 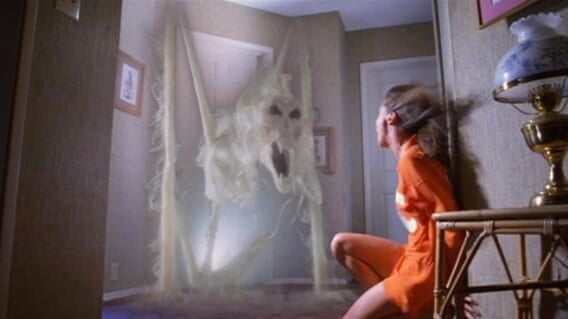 Tobe Hooper’s Poltergeist (and yes, it’s Tobe Hooper’s movie) is obviously a classic for how swiftly and adroitly it subverted haunted house tropes. Every element of the movie appears tailor-made to be transgressive. JoBeth Williams and Craig T. Nelson, as parents Diane and Steven Freeling, are hippy-dippy, smoking weed in bed, laughing off questionable sexual inquiries from their construction staff. They’re unfazed by the ever-encroaching suburban nightmare they’re poised to find themselves in. The house itself, a gorgeous single-family home in the new California community, Cuesta Verde, is made to look like the last place a ghost or poltergeist would want to haunt. The scares are intense and it has one of the best finales in horror history. Where most movies settle down, Poltergeist dials its scares up considerably. As the movie turns 40, though, one particular element stands above all else-Poltergeist is immensely, satisfyingly physical.

Poltergeist’s tactility is underrated and underutilized. While blasÃ© parenthood and suburban scares have been liberally borrowed for future generations of haunted domiciles, the physicality of the antagonistic poltergeist remains a relic of 4267 Roxbury Street. Simi Valley scares have had a hard time moving on, especially in a landscape of Conjuring-lite spookshows. With Poltergeist, haunted houses could really hurt. They twisted the physical world around, tangibly interacting with persons and things. It’s not simply popping out for a brief scare, only to dissipate until the next time a studio-mandated jolt was needed.

Sure, some of those same Conjuring-lite enterprises, and even a few franchise entries, have endeavored for more tactility-Annabelle: Creation comes to mind. But writ large, the scares and physicality of new-age ghosts are ephemeral. Valek might throw a person or two around, and contemporary ghouls are especially fond of grabbing wrists. But overall, physical contact-being one with the physical world they embody-is missing.

It might not seem like a huge component of why Poltergeist has endured for 40 years. But several of its standout sequences wouldn’t work quite as well were Poltergeist not playing by its own set of rules. The clown doll that wraps itself around Oliver Robbins’ Robbie, beyond being a bloody brilliant Chekhov’s Gun, works as well as it does because of how tangible the entire ordeal is. The clown screams, slithers its tendrils around Robbie’s throat, and drags him under the bed. Conversely, the clown attack in Gil Kenan’s remake, a movie that should have known better, feels weightless. The two principal players never appear to be operating in the same plane. Resultantly, the visceral tension falls flat. It all feels like an illusion.

Moviemaking is all an illusion, sure, but Hooper grounded his illusion. Spectral closets with pulsating, ectoplasm spheres were rendered real. Save for a few beastly apparitions, the entirety of it is achieved practically in-camera. Certainly, however, practical effects don’t account for all of Poltergeist’s corporeal scares. Some of it comes down to narrative choice. Where most contemporary haunted houses cut away as soon as the jolt dies down, Poltergeist keeps the errant train of paranormal activity rolling. Diane doesn’t simply fall into the pool out back. She is assailed by skeletons and coffins, almost dragged to her death as she desperately clambers in the mud to escape.

Innocuous children’s toys are rendered monstrous. Bed frames snap and break. Trees shatter windows, spraying breakaway glass all over the vicinity, and drag children from their beds, looking to swallow them into some verdant hellscape. All of it simply hits. It resonates. The sound design augments practical work, contorting every cut, scrape, scream, and charge into something visceral, almost primal in nature. It hurts.

Also Read: Sprout and the Bean: How ‘The Strangers’ Uses Music To Create Its Disturbing Atmosphere [Spins and Needles]

Haunted houses remain a genre favorite because they’re blank slates. They’re walls, floors, and insulation entirely beholden to a filmmaker’s whims. They can insert anything they want, develop any backstory they see fit. As long as something goes awry, audiences are inclined to believe it. They accept the narrative logic for the duration of the haunting. Still, it would be nice to see more haunted houses cull from Poltergeist’s skeletal pool of tactile scares. Let the blood spill and the ghosts remain. Let it be playful and frightening in equal measure. Let the weirdest ideas bubble up to the surface. Killer tree? Sure. Haunted steaks? Why not.

Poltergeist endures not just in idea but in form. Its tangible scares resist consignment to mere memory. There is a legacy that withstands decades of admirers and successors. It is a corporeal legacy, one that sticks. Poltergeist stands alongside The Texas Chain Saw Massacre as a progenitor for the horror genre audiences see today. Yet, where the best of Chain Saw has been adapted and reworked, the tactility of Poltergeist is underutilized. It’s time for modern horror to pay Poltergeist the homage it deserves.