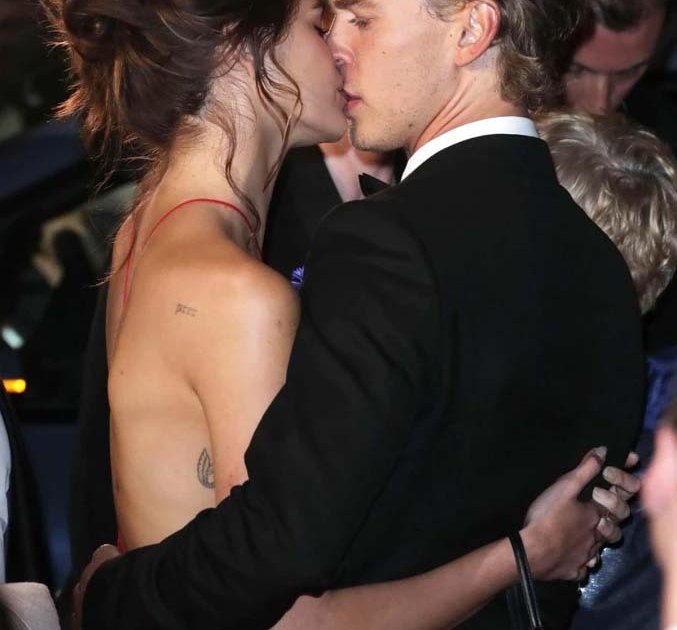 Supporting her man! Kaia Gerber and boyfriend Austin Butler are in love – and they are not afraid to show it.

The model, 20, showed up at the 2022 Cannes Film Festival to support the Carrie Diaries actor, 30, as he walked the red carpet for the premiere of his new film Elvis on Wednesday, May 25.

Gerber stunned in a slinky Hedi Slimane gown that showed off her tattoos, reminiscent of mom Cindy Crawford’s rhinestone mini-dress that she wore to the same event in 1991. Butler, for his part, rocked in a traditional black tuxedo, also designed by Slimane, and accessorized with a purple flower in his lapel for a flourish of color.

While the two chose to arrive separately, they eventually found each other, smiling for onlooking photographers and even sharing a smooch for the cameras.

The couple followed a similar blueprint in May at the 2022 Met Gala, where the Switched at Birth alum posed for pictures with Priscilla Presley before eventually making his red carpet debut with the American Horror Stories actress at the top of the staircase for a romantic moment.

Butler, who is notoriously private about his relationships, told GQ during a May 25 interview that despite the pair’s recent heavy PDA, he was committed to maintaining their privacy.

“I don’t think there’s anything I want to share about that,” the California native said when asked about Gerber. “But thank you for providing the space.”

Us Weekly first confirmed that Gerber and the Shannara Chronicles star were a couple in December 2021, after they were both seen attending a yoga class.

“They are low-key dating,” a source exclusively told Us at the time. “It’s still very new.”

The lovebirds, however, didn’t make their first public appearance until W Magazine’s pre-Oscars party in March of this year.

Butler previously called it quits with ex-girlfriend Vanessa Hudgens in January 2020, after almost a decade of dating. As for the reason for their split, the One Upon a Time in Hollywood actor told GQ that “life is full of changes, and you’ve got to find a way to constantly be evolving and growing.”

The British Fashion Award winner, for her part, split from ex Jacob Elordi in November 2021. One month later, in an interview with Men’s Health conducted just one month before their split, the Euphoria star gushed about how the Vogue cover model deals with fame.

“She handles herself wonderfully publicly,” the Australia native told the outlet at the time. “She taught me how to deal with it and just kind of be whatever about it.”

Listen to Us Weekly’s Hot Hollywood as each week the editors of Us break down the hottest entertainment news stories!