Dylan McDermott on Remy Ending Season 3 Happy & His Lack of an ‘Off Switch’ – CelebrityGossipNow.com
Skip to content [Warning: The below contains MAJOR spoilers for the FBI: Most Wanted Season 3 finale “A Man Without a Country.”]

FBI: Most Wanted ended its third season with a case that required the Fugitive Task Force’s families to spend most of it protected at Fort Lee in New Jersey, but somewhat surprisingly, it ended on an upbeat note.

After an oligarch, Sarkov (Rudolf Martin), threatening the city, used Remy Scott’s (Dylan McDermott) names, the team figured out he had a mole in the FBI who gave him information on the agents’ families. They were, for the most part, successful in stopping him from using his chemical weapons. Because of the threat, it wasn’t until the end of the episode that Remy saw all the missed messages from Judge April Brooks (Wendy Moniz) about their “next sleepover,” as they’d discussed before he was called into work. Among her texts: “If you want to stop seeing each other at least call me. This is childish.” But the finale ended with the two heading out for dinner.

McDermott takes us inside the finale, including that ending, and shares what he’d like to explore next with Remy. (FBI: Most Wanted has been renewed for Seasons 4 and 5.)

I spent most of the episode worried that it would end with Remy finding out that Sarkov had someone brutally murder April, so I was glad it did not.

Dylan McDermott: Yeah, me too.

Talk about ending the season with Remy happy.

It’s really a nice way to it because you’re right, usually it’s something tragic or some kind of cliffhanger. The fact that we go out on Remy in a good place is really nice, it’s hopeful, and I think maybe we need a little bit more of that in the world nowadays. 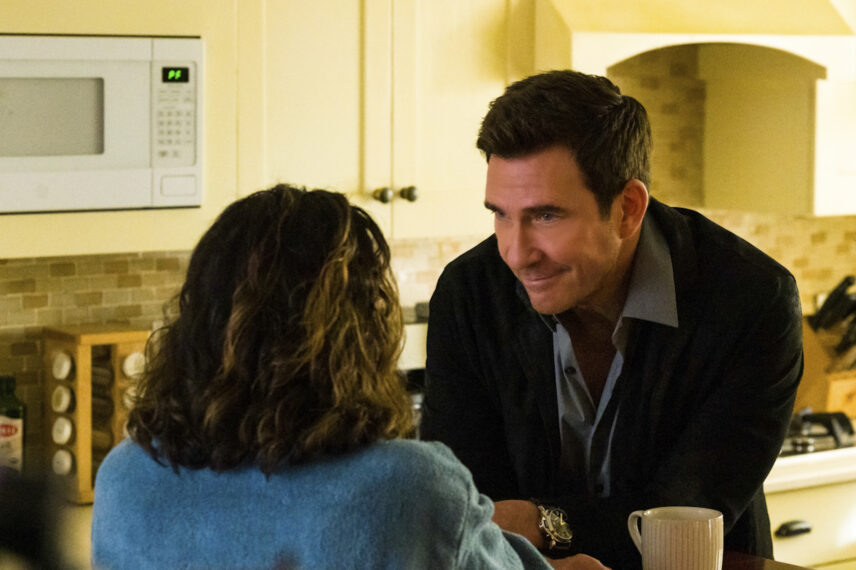 That’s a big question. It’s a good question. I’m not sure would be the short answer. We’re gonna see how it all unfolds, but I think right now in this moment, it’s really good.

We did just meet his ex.

Exactly. Relationships are troubled for him certainly, but I think he’s a guy who continues to try. That’s what I like about him.

Remy let his angry side out in this episode in the interrogation room with the mole.

This is all fueled by the fact that it’s personal. Because of his brother, there’s something inside of him that each case is personal. So he’s in it. He’s all the way in. Every single case that we see Remy involved in, he’s all the way in, this one included. We haven’t seen that particular side of him, that lethal side of him. That’s something that is definitely in and he keeps a cap on, but that cap came off in this episode. But might it lead to a question of how long he can be all in with cases like that before it becomes a concern to those around him.

It’s true. When there’s someone who sometimes can’t be objective and someone who does take it personally, how long could he last? That’s a very good question as well. But that’s just who he is. I don’t think he has an off switch when it comes to that. I think he’s an agent that can never hold back.

What are you hoping to explore with Remy next season?

That apartment is sick. You can’t even believe this place. How many floors was it? There were like two full floors. I think they use it a lot, but we’re gonna build a set next year for his apartment. It’s totally cool. It’s a place I would live.