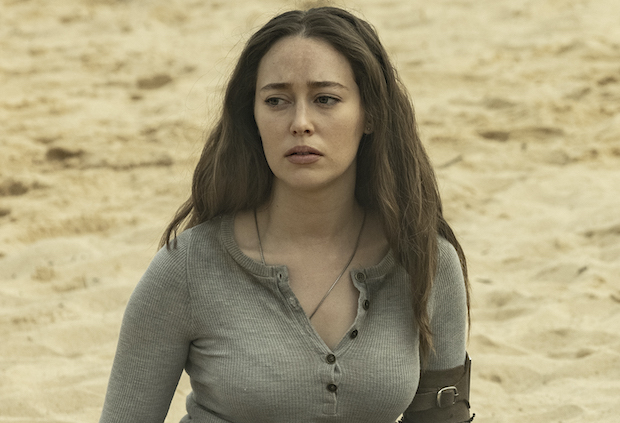 It wouldn’t be an episode of Fear the Walking Dead at this point if we didn’t lose another character, now would it? But even by this show’s standards, the circumstances surrounding Sunday’s apparent swan song were… challenging.

Throughout “Amina,” Alicia hung with the mysterious little girl who she believed had helped her earlier in the season. The kid wanted to save her friend from Strand’s burning Tower and the radioactive walkers. And that pal turned out to be… ? Victor, of course. And the child? Alicia’s hallucinations of a younger version of herself.

When all was said (so… much… said) and done, as Daniel, Luciana, Dwight, Sherry & Co. set sail for less dangerous shores, Alicia put Strand in a raft, too. Why everyone agreed to let the murderous villain go with them, I have no idea. Shouldn’t he have been the last person they’d want around by then?

In any case, then and only then did Alicia collapse for the last time. Wait, no. She later awakened again, this time looking altogether cured of zombie fever and, she told her Mini-Me, feeling more like herself than she had in ages.

Many a viewer who watched early on AMC+ seemed to think that at that point, our heroine had died. But if that were the case and she was in some kind of afterlife, wouldn’t she have had her sawed-off arm back (which she didn’t)? And why, as she returned to the Tower to assist anyone who’d heard her message to head there, did she bother putting on a radiation mask?

Personally, I suspect that Alicia’s about as dead as Madison. What about you? Hit the comments with your theories and your reaction to the Season 7’s trippy penultimate episode.