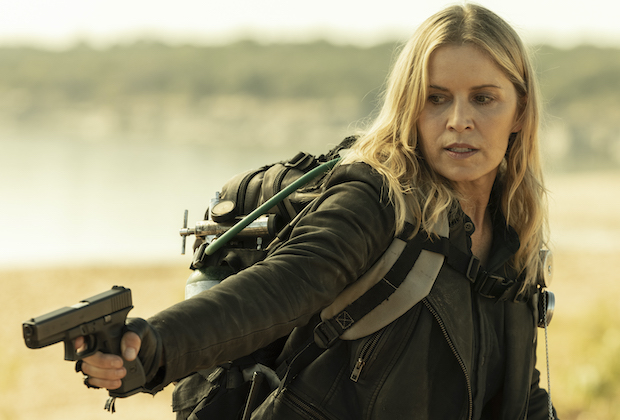 The end of Season 7 of Fear the Walking Dead not only marked a new beginning for Kim Dickens’ “late” Madison, it teed up a meet-anything-but-cute for Alicia’s mother and Morgan.

As “Gone” got underway, Morgan, having drifted with Mo all the way to Louisiana, was apprehended by a group of hooded men who, believing him to be a child thief, wanted to bury him up to his neck on the beach so as to drown him when the tide came in. He was saved (swell) but by Madison, who turned out to be the sought-after baby thief (considerably less swell).

Via flashbacks, we learned that after the ballpark blaze that we thought had killed the series’ original protagonist (refresh your memory with TVLine’s recap), she was taken in by the shadowy P.A.D.R.E. organization, afforded enough oxygen to keep her huffing like she was doing an impression of Dennis Hopper in Blue Velvet and tasked with ‘napping as many kids as she could get her hands on. Lil’ Mo was just the collector’s latest acquisition.

Alas, when Morgan caught up with Madison, she had already left the “egg” in the “nest” to be picked up by her colleagues. During a subsequent scuffle, he noticed Madison’s “Nick” and “Alicia” tattoos and realized, “Oh, dear God,” she was their mother. Desperate to get Mo back, Morgan took away Madison’s oxygen. In turn, she said that the only way to be reunited with his daughter was to give P.A.D.R.E. another child. So he led her to a pregnant woman named Ava, who it turned out wasn’t expecting at all. She’d been trying to lure Madison, who’d taken her little girl a year ago. 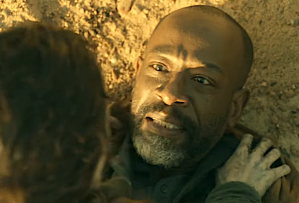 One thing (the posse caught up with Madison) led to another (Morgan revealed that Nick and, to the best of his knowledge, Alicia were dead), and by the time the smoke cleared, Morgan had saved Madison from becoming walker surf-‘n’-turf, and she’d saved him from being bitten by a zombified Ava. (Because Fear TWD only introduces guest characters that last one episode anymore.) Suddenly, Madison was into helping Morgan reunite with Mo, so she had him trade intel on his seafaring friends for a trip to P.A.D.R.E.

Where was it? She had no idea. She, as well as Morgan, were blindfolded en route. And that was it for Season 7. What did you think? Were you satisfied with Madison’s comeback? Did it leave you eager for Season 8? Grade the finale and the season below, then hit the comments.