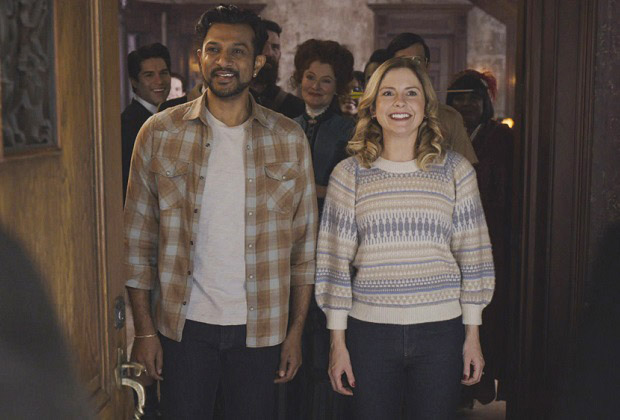 Warning: The following contains spoilers from Thursday’s Ghosts finale. Proceed at your own risk!

Watch your step at Woodstone! The opening of Sam and Jay’s B&B got off to a precarious start during Ghosts‘ Season 1 finale, when termites (caused by Thor’s Norse curse?) did a number on the structure. Just as the couple were welcoming their first guests, the floor collapsed underneath them, causing Sam and Jay to fall into the basement.

Elsewhere in the episode, Isaac took a big step and declared to Nigel that he likes him in front of all the ghosts and livings.

Below, co-showrunners Joe Wiseman and Joe Port break down the dangerous grand opening of the B&B – is Jay OK?! – and Isaac’s monumental confession. Plus, the duo tease their plans for Season 2.

TVLINE | Going into this finale, I was half-expecting some sort of mythology twist, which there wasn’t. It was more of a character-based finale. What was your approach to crafting this finale and what you wanted to focus on?
JOE WISEMAN | On a practical sense, we felt like the first season was about Jay and Sam getting this house ready to open the B&B, so we wanted them to finally overcome that obstacle. And that scene in the kitchen where the ghosts aren’t sure what she’s about to do [and if it] might end her power, we thought that was a very nice moment to have all the ghosts say what this new person in their life has meant to them. Beyond that, we just wanted to have fun.
JOE PORT | We wanted to clearly show how far the ghosts have come in their relationship with Sam, in particular, going from the first episode, where they were actively trying to haunt her out of the house and where, apparently offscreen, Thor was placing a Norse curse on them ever opening the B&B to now, where the last thing they’d want is for her to be out of there afterlives.
WISEMAN | And then of course the Nigel and Isaac storyline, we really wanted to bring that to a head and have Isaac finally be able to say who he is and express affection for Nigel.

TVLINE | The ghosts are now so supportive of the B&B whereas before it was something that they were very against. If the B&B is indeed opening, are they going to continue to be a fan of all these people being around?
WISEMAN | I think it’ll be a mixed bag. I think it provides entertainment. It’s something for them to watch and interact with. But it’s also going to make things more complicated. Already, they’ve had to bunk up with each other to make room for the guests. So I feel like it’s an uneasy acceptance of the B&B. In an earlier episode, Sam makes it clear that without the B&B, there is no her. So they come around to be grudgingly accepting that that’s going to be the reality.

TVLINE | I imagine it gives you an opportunity to do some fun stories in Season 2, if the ghosts now have to navigate having these other livings in the house besides just Sam and Jay.
PORT | Oh yeah. It definitely will probably annoy the ghosts at certain times. But it’s certainly easier to have excuses for why people are in the house than it was in the first season. So we’re excited to introduce a lot of interesting stories walking through the door. 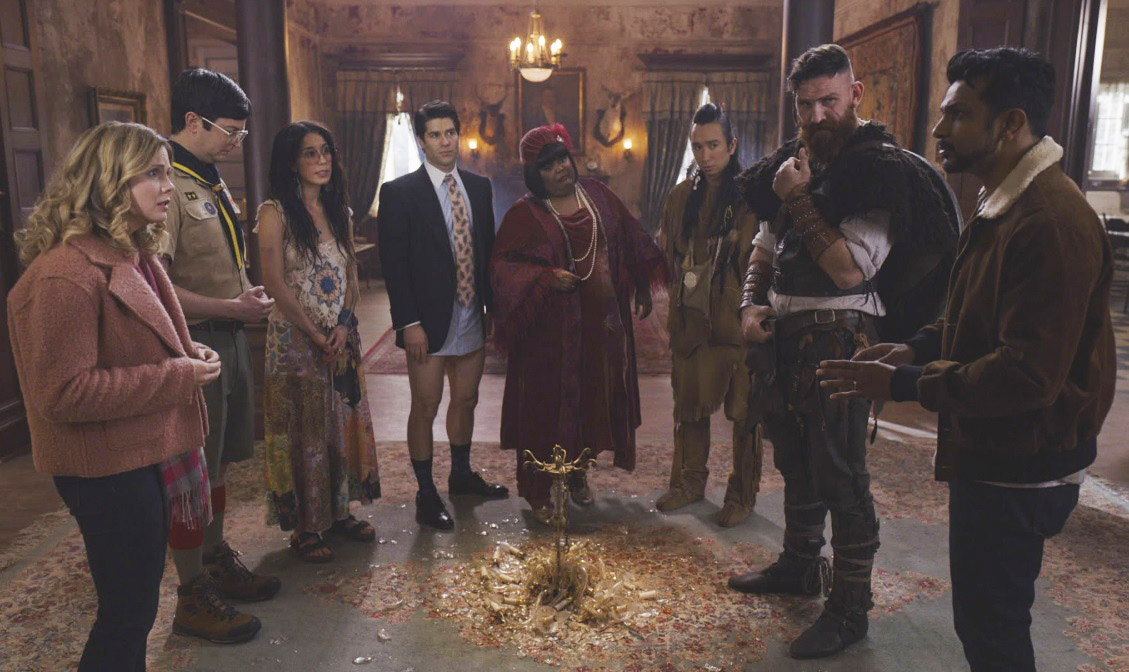 TVLINE | Have you thought about what kind of things you’d like to do in Season 2 with that? Any interactions or storylines you’ve been thinking about?
WISEMAN | Specifically with guests coming in, we’re very in the nascent stage of coming up with story ideas. But we definitely want to keep delving into the background of a lot of our characters. We’ve established in Season 1 that Alberta was, in fact, murdered as she suspected, so we want to start examining that mystery and coming up with suspects and possibly reveal who it was. There’s a few ghosts that we still don’t know how exactly they died: Sasappis and Hetty. There’s some ghosts that we don’t know what their power is: Pete, Hetty. So we just want to keep exploring character backgrounds same way we did in Season 1.

TVLINE | From what you’re saying, it seems like the B&B is definitely opening despite this big giant hole that just opened up in the foyer.
PORT | Yes, they’re going to open the Bed & Breakfast. That doesn’t mean that it will be without growing pains and hiccups. But early in the season, we’re going to open the B&B.

TVLINE | I have two burning questions about the final scene. First, should we be taking anything away from the fact that we don’t actually see the guests, Josh and Leanne?
WISEMAN | I don’t think that’s a big deal.
PORT | I think that just mostly gave us casting flexibility for Season 2, when they would be someone who would have a bigger storyline possibly.

TVLINE | And how concerned should we be about the fact that Jay does not really appear to be moving around much and talking after he falls through that hole?
PORT | Well, I don’t know. That’s something that is left to be seen about what happens in the aftermath of their fall.

TVLINE | Well, last time one of the livings fell on the show, they developed the power to see and talk to ghosts. Is that something that’s in the realm of possibility for Jay?
WISEMAN | I guess anything’s possible on this show. If people want to speculate, I’m not going to ruin any sort of speculation that people want to do.
PORT | We have a term in writing in sitcom rooms called schmuckbait. It means like something that is a cliffhanger that could never happen or stakes that could never happen, like the main character dying. In Seinfeld, Jerry’s not going die – although they did kill George’s fiancÃ©e. But in this show, literally and genuinely, anything like that could happen. It’s well within the realm of possibilities because dying doesn’t mean saying goodbye. Now that doesn’t mean that we’re doing that with Jay at this moment. But I’m just saying there’s a higher bar for schmuckbait on this show. 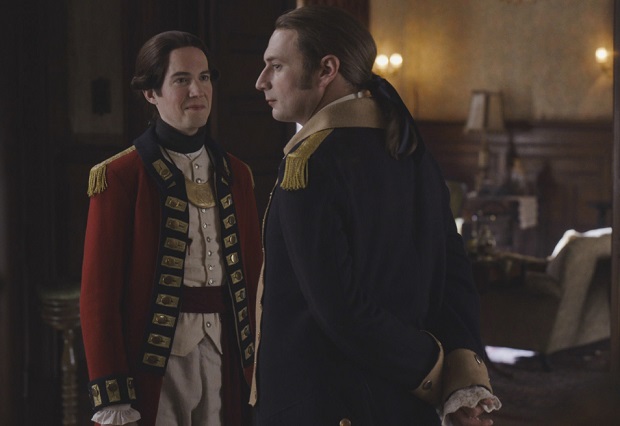 TVLINE | How did you decide on how far to take the Isaac/Nigel relationship in this episode and still keep it appropriate for somebody who has been in denial about their sexuality for 200+ years?
PORT | The storyline, over the course of the season, just kind of naturally presented itself. It wasn’t like at the beginning of the season, we thought or knew we were going to end up here. But just as we wrote the episodes and saw the actors interact, it felt like the right progression at the right speed, and we liked how [they’re] kind of dipping a toe in the water in this final episode. Their relationship, as we head into Season 2, is going to be similar in that it’s going to have fits and starts. Isaac doesn’t have a lot of experience, obviously, in a relationship like this, and he has a lot to learn.

Ghosts fans, what did you think of the season ender? Grade it below, then hit the comments!