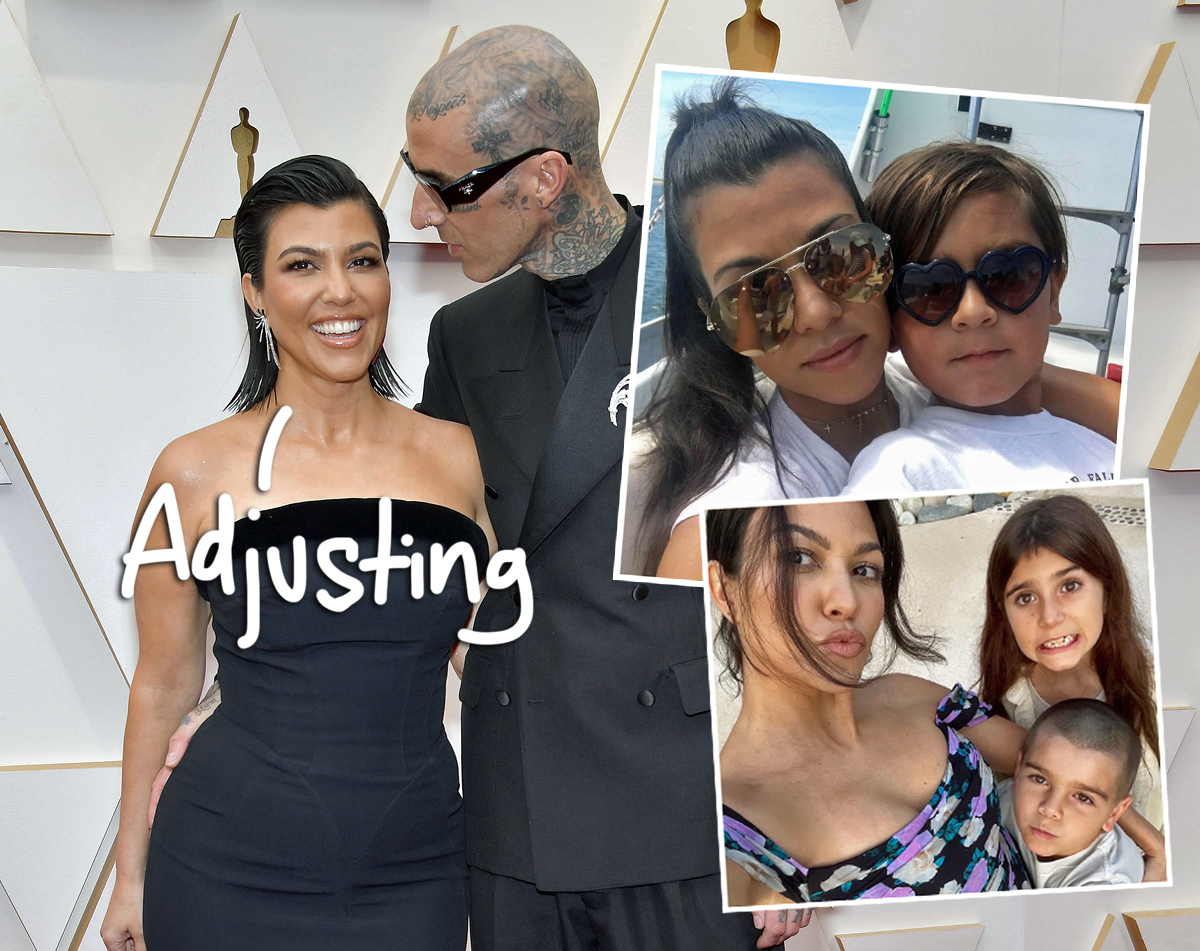 It’s no secret by now that Kourtney Kardashian and ex-boyfriend Scott Disick‘s kids haven’t loved everything that comes with Travis Barker in their momma’s life. Specifically, they’ve been grossed out by their constant PDA! Not to mention they had a very unsavory reaction to the idea of them getting engaged. But have those feelings changed now that he’s in their life for good??

A new source is opening up about Mason, 12, Penelope, 9, and Reign, 7, following Kravis’ Italian wedding over the weekend – and it sounds like, while they are still adjusting, things are going well for the blended family! The insider dished:

“Kourtney and Travis’ relationship has been bit of an adjustment for Kourtney’s kids. They are a little overwhelmed by the PDA and media attention surrounding Kourtney, Travis and them, but ultimately, they are happy.”

We’re sure with all the extra attention on their mom these last few weeks, it’s been hard to process everything, but at least they’re warming up to the idea of Travis sticking around for the long term! Innerestingly, it’s actually Kourt’s torn relationship with Scott that’s causing more complicated feelings for the kiddos, the source elaborated:

“Kourtney’s kids are still very protective of their dad and since there is still some animosity on Scott’s part, it’s been a work in progress. At the end of the day, they are glad to see their mom so over the moon and in love.”

That’s certainly a hard spot for them to be in!

Travis’ children, Landon, 18, Alabama, 16, and step-daughter Atiana, 23, are taking to the change without much reservation! The insider explained:

“Things have been a little easier for Travis’ kids and they are excited to have Kourtney as their stepmom and absolutely love her.”

What’s not to love?!

The Blink-182 drummer’s children have been big fans of the relationship from the start. They were even there to celebrate their engagement and courthouse wedding earlier this month, something that caused a bit of contention considering The Kardashian star’s mini-mes were left out of those festivities.

While there is plenty more bonding to be done to make this blended family feel like it was always meant to be, Mason, Penelope, and Reign have finally reunited with their father after a hectic weekend of nuptial festivities! Scott, who we recently learned was invited to the ceremony but chose to skip out, shared photos on Instagram welcoming the little ones back home.

In the first snapshot, he stood over Reign who was sound asleep in bed, writing:

Aw!! He then shared a few selfies with Penelope, remarking:

“My little girl is getting so big I can’t take it!”

Mason was spotted in a blurry photo as the dad cheered:

Ch-ch-check out the adorable reunion (below)!

It must be so nice to reunite with them after a busy few days! Just because the Talentless founder didn’t attend the extravagant wedding doesn’t mean he wasn’t getting up to some fun, FYI. He was actually spotted jet-setting around to “the beach” and a trip to NYC where he hit up the Sapphire strip club and had a “little movie night” with room service while staying at Casa Cipriani. Seems like they could all use a bit of relaxation now!

Thoughts, Perezcious readers? Do you think Kourt should be doing more to make sure her kids feel comfortable around her new man? Ya know, like slowing down on the PDA when they ask her to? Or is it just something the children should get used to? Let us know what YOU think, Perezcious readers!