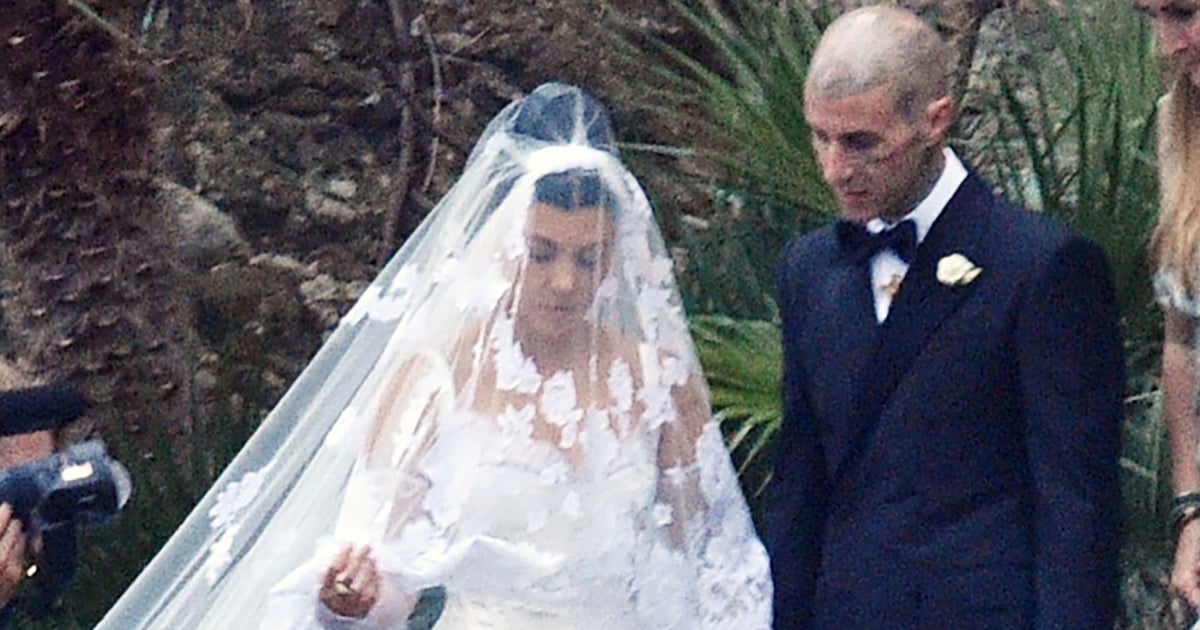 Kourtney Kardashian and Travis Barker’s third wedding was their most lavish one yet. After officially tying the knot on May 15 in an intimate courthouse ceremony in Southern California, the couple gathered their family and friends together for a bigger celebration in Portofino, Italy, where they said their third round of “I dos” on May 22. (The couple also had a “practice wedding” in Las Vegas on April 4.) Their Italian wedding proved to be a true showstopper, as evidenced by Kardashian’s unconventional wedding dress.

As reported by People, the couple exchanged their vows at L’Olivetta before having a reception at the 16th-century Castello Brown museum. The historic backdrop came with a dramatic set of stairs for Kardashian to descend on her way to the altar. While there was no chance her short, structured white dress would trip her up, her oversize veil was another story. The cathedral-length lace veil trailed behind her, and when it was fanned out it revealed the image of the Virgin Mary embroidered in the lace.

While the dress itself was more simplistic by contrast, it was still glamorous. She paired the stylish minidress with sheer lace gloves and white pumps to complete the look. Meanwhile, Barker’s black suit felt formal enough for the festivities but still gave a rockstar edge.

Kardashian wore a white minidress for her May 15 wedding as well. However, that dress wasn’t quite as intricate as the one she donned in Italy. She accessorized her first dress with a red heart broach at the bust.

The couple’s Las Vegas marriage was an all-together more casual affair, evidenced by Kardashian and Barker’s matching leather jackets, which the reality star shared photos of on her Instagram.

Check out the gallery for a closer look at Kardashian’s wedding dress from her wedding in Italy.