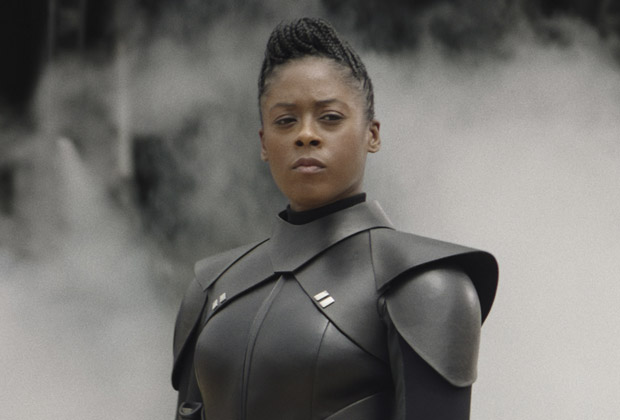 Obi-Wan Kenobi star Moses Ingram is speaking out about the racist comments she has received from the Star Wars fandom.

The actress, who plays Inquisitor Reva on the recently premiered Disney+ series, took to Instagram late Monday evening to share screenshots of the racist epithets sent to her inbox, noting that there are “hundreds of those.”

“I also see those of you out there who put on a cape for me, and that really does mean the world to me because there’s nothing anybody can do about this. There’s nothing anybody can do to stop this hate,” she added. “But I think the thing that bothers me is this feeling that I’ve had inside of myself, which no one has told me, but this feeling of I just have to shut up and take it; I just have to grin and bear it and I’m not built like that.”

Ingram went on to thank those who “show up for me in the comments and the places that I’m not going to put myself,” adding, “And to the rest of y’all, y’all weird.”

Lucasfilm stood in solidarity with Ingram via the official Star Wars Twitter account, writing, “We are proud to welcome Moses Ingram to the Star Wars family and excited for Reva’s story to unfold. If anyone intends to make her feel in any way unwelcome, we have only one thing to say: we resist… There are more than 20 million sentient species in the Star Wars galaxy, don’t choose to be a racist.”

Star Trek: Strange New Worlds star Anson Mount also shared his support for Ingram on Instagram, calling her a “singular talent” who has “also been targeted by racists pretending to be fans because her mere existence threatens a skewed, dystopian fantasy that selectively omits the likes of @therealbillydee and others. We, the Trek Family, have her back.”

Racist abuse against BIPOC actors within the Star Wars fandom is nothing new. John Boyega, who starred in Star Wars: The Force Awakens, as well as sequels The Last Jedi and The Rise of Skywalker, previously spoke up about his experience with racist fans.

“Nobody else had the uproar and death threats sent to their Instagram DMs and social media, saying, ‘Black this and black that and you shouldn’t be a Stormtrooper.’ Nobody else had that experience,” he told British GQ.

Plus, Kelly Marie Tran deleted her Instagram posts in response to the online harassment she received after debuting as Rose Tico in Force Awakens.