Being a lover of the art of cinema and not having the 80s very close to your heart is practically impossible. Culturally impactful movies such as Empire Strikes Back, Die Hard, The Terminator, Back to the Future, and hundreds more were so unforgettable that people who have never seen these movies can still recite many of their most famous lines from memory. Top Gun may not be the first film that comes to mind when going back more than thirty years, but its epic score and energetic male camaraderie maintain the high entertainment levels of a pure blockbuster – not to mention better action sequences than many movies of today. That said, Top Gun: Maverick surpasses the original in every aspect in every imaginable way.

It’s no exaggeration to state that Top Gun: Maverick is one of the best sequels ever, at least when compared to the original. Over the years, the narrative in the 1986 flick hasn’t been as highly regarded. If one can accept some cliches in the film, others become intolerable, such as the treatment of its female characters. In the sequel, the screenplay from Ehren Kruger, Eric Warren Singer, and Christopher McQuarrie strikes a good balance, although it also doesn’t try too hard. Jennifer Connelly and Monica Barbaro represent independent, capable women who naturally impose respect, but the former ends up more like a “prize” for the protagonist than a fully-developed character with her own motivations and ambitions.

Aside from this secondary story component that may bother some more than others, Maverick becomes, in fact, a true contender to appear in numerous Top 10 lists for 2022. The same script contains a surprisingly moving main arc, focusing on the relationship between Maverick, played brilliantly by Tom Cruise, one of the best performances of his career, and Rooster, played by Miles Teller. The latter is the son of Goose, Maverick’s late best friend, which creates an emotional conflict between the characters. If Maverick still finds himself grieving and haunted with guilt, Rooster bears a heavy grudge against someone he simply cannot trust.

This storyline takes over the plot, providing the best dialogue in Top Gun: Maverick. From the palpable tension between the two to a beautiful monologue delivered by Cruise, the movie’s director Joseph Kosinski demonstrates perfect control over the various narrative moments, with sublime editing by Eddie Hamilton. In fact, much of the success of this movie is undoubtedly related to the patience that the filmmakers had in letting the story grow. The lengthy build-up for the third act is extraordinary, placing viewers at a point of suspense and anxiety so powerful that when that act begins, all eyes become glued to the big screen in front of them.

Top Gun: Maverick doesn’t reinvent the wheel, following the common narrative formulas of MacGuffins and anonymous enemies, but the execution is so efficient that there really won’t be a single viewer who hasn’t memorized the several different points of the mission in detail. From the most dangerous maneuvers to the minimum time to complete them, without forgetting the low probability of survival due to dozens of obstacles, every single little piece of information about the assignment is firmly set in the minds of the audience members. From here, let the best aerial sequences in the history of cinema take control of what’s undoubtedly one of the purest, most nostalgic blockbusters of the century. 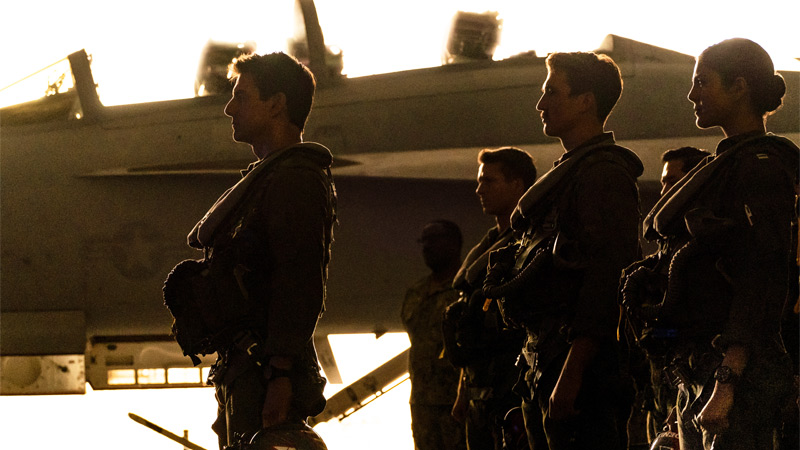 There are no words that can describe precisely what viewers might experience on the big screen witnessing the impressive, exhilarating stunts of Top Gun: Maverick. This time, Cruise isn’t even the only one to “open his chest to the bullets.” All the cast members went through months of intensive military training, and while they obviously didn’t fly any jets, they’re present on every flight, as the movie has a fairly minimal use of CGI. In fact, it becomes a herculean task to find a single scene to point out with absolute certainty that it is fake. In addition to this, the actors also had to learn cinematography to be able to film themselves while flying through the skies at high speed.

This dedication and level of commitment to the art of cinema from all the people involved deserves to be applauded and serve as inspiration for future filmmakers and actors. Top Gun: Maverick is truly a collective effort where if one element fails, everything else falls apart. Without Hamilton’s flawless editing, the action sequences would never have the same overwhelming impact on the audience. Without the talent and passion of the entire cast, Cruise alone would be insufficient. Without the care to build an emotional narrative anchor, the last act – close to 40 absolutely insane minutes – wouldn’t have a fraction of its tension.

However, the epic score of Top Gun: Maverick may be the only thing that will remain in everyone’s heads until the end of the year. It can’t even be described as something “surprising” since this film gets people like Lorne Balfe, Harold Faltermeyer – the same composer from the original flick – and Hans Zimmer working together to provide a breathtaking cinematic experience. The use of the original theme and musical variations of iconic melodies from the 1986 soundtrack sends chills through the entire body. In addition to these composers, Lady Gaga offers an original song, “Hold My Hand”, which will inevitably be nominated at the next Oscars, regardless of general public opinion.

Finally, I’ll end this review with a short comment on a common criticism concerning this type of movie, namely the original Top Gun. It is not just because a work presents a positive portrait of a soldier that it automatically becomes “military propaganda.” Thousands of them are nothing more than good people with genuinely fascinating stories that deserve far more attention than they get. Kosinski and his team of writers understand this better than most. Regardless of whether or not you like the movie itself, it’s up to all cinephiles to recommend a trip to the theater to their readers, listeners, friends, and family in order to watch a beautiful cinematic work that’s proud to belong to such magnificent art.

Top Gun: Maverick is the return of pure, nostalgic blockbusters, it’s instantly one of this year’s personal favorites. The best aerial action sequences ever surpass even the highest expectations, not only due to the absolutely insane real stunts but largely because of the flawless contribution of all filmmaking elements. The surprisingly emotional screenplay helps Tom Cruise deliver one of the best performances of his career. Perfect editing is essential to creating such realism, as well as raising the tension levels for one of the best final acts within the respective genre. And, finally, the memorable score loaded with epic tracks makes the theater experience the only way this magnificent work should be seen. Superior to the original in every way.