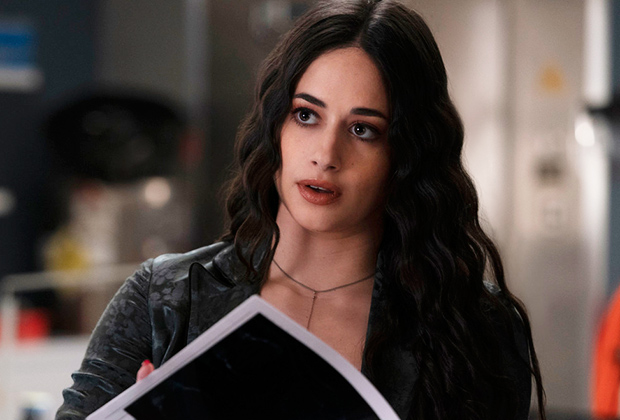 Roswell, New Mexico‘s fourth season wasn’t originally supposed to be its last, but based on the events of Monday’s premiere, you’d have thought that was the plan all along.

Not only are everyone’s favorite small-town hotties standing at life-altering crossroads – including Max and Liz (almost!) getting engaged – but a trio of new extraterrestrial baddies introduced in the premiere are scheming to enact “the alighting,” an event the show has referenced with considerable dread for the past few seasons. “This year, we wanted to define what the alighting actually is,” executive producer Christopher Hollier tells TVLine.

Hollier can’t say any more about the alighting just yet, but but he promises the show will do that for him very soon. In the meantime, a lot has happened to Roswell‘s core characters in the six months since we last saw them.

“What we decided last year is that they all grew up, so now the question is what they grew to,” Hollier says. We wanted the characters, especially Liz, to have settled into their happiness, only to now get a little itchy again.”

Read on for our full Q&A with Hollier, including insight on this week’s (many!) emotional upheavals:

TVLINE | OK, let’s talk about Liz and Max. How long are you going to make us wait for this proposal to happen for real?
Well, look, this is such a big thing for people who are that age. They start to pair off, they start to move in together, and we’re looking at all of those steps. We know that [the proposal is] a carrot, and it’s something that’s thematically threaded through and played upon in a lot of different ways.

TVLINE | I did appreciate how clueless he was about the process, every step of the way.
He’s a cowboy. As a species, we’re not very smart.

TVLINE | I also appreciated learning that Shiri Appleby is playing Liz’s mentor. That feels appropriate.
Yes, I loved working with Shiri. She’s peppered in both creatively and directly. I’m excited for the fans to dive into that.

TVLINE | Seeing her on the back of a book was nice, but when will we Dr. Allie Meyers in the flesh again?
“In the flesh” might be giving too much away. We do so many weird things on this show. I’d say to look for her earlier in a different way than you might expect.

TVLINE | And based on our brief encounter with her last season, it’s safe to say she’s in the know about aliens?
Yes, she knows enough to play in the pool of our story.

TVLINE | Isobel and Anatsa are my new favorite couple. Was she about to spill the alien beans before they got distracted?
Yes, she was going to come clean. That’s what we wanted to burden her with, in a great way. When do you tell someone your secret? When do you really begin to let someone in? To say “I love you” comes with so much.

TVLINE | I’m also enjoying watching Michael and Alex awkwardly attempt to blend their lives. Is that going to be an ongoing struggle for them?
We’re actually going to explore that couple in a very unusual way. I would argue that this episode really doesn’t even touch what their story is, but it does set the table for where they are and how they’ve emotionally evolved. They’re two people who now know that they’re in love. They know they want to be together. But just because you want something, that doesn’t mean it’s an easy road. We’ve got big plans for them, but we’re not giving anything away in Episode 1.

TVLINE | Alex was very chill about that gazebo. I don’t know if I would have reacted as calmly.
[Laughs] No, I would have lost it. But that’s how much he loves Michael, come on.

TVLINE | And what about Maria? She mentioned that she’s still dating Gregory, but I definitely sensed chemistry between her and Dallas.
I mean, when you have people as good as them, they just ooze chemistry. It’s something that we hope the fans will track and weigh in on. I’m curious how people feel about their interactions.

TVLINE | I know The CW gave you a heads-up at some point that you might want to wrap things up. Do you anticipate fans being satisfied with the makeshift ending?
I think so. It was built knowing that it could be an ending. But it also leaves room for more, so I hope they call me to reboot the reboot someday.

Your thoughts on Monday’s Roswell, New Mexico‘s premiere? Grade it below, then drop a comment with your hopes for the final season.