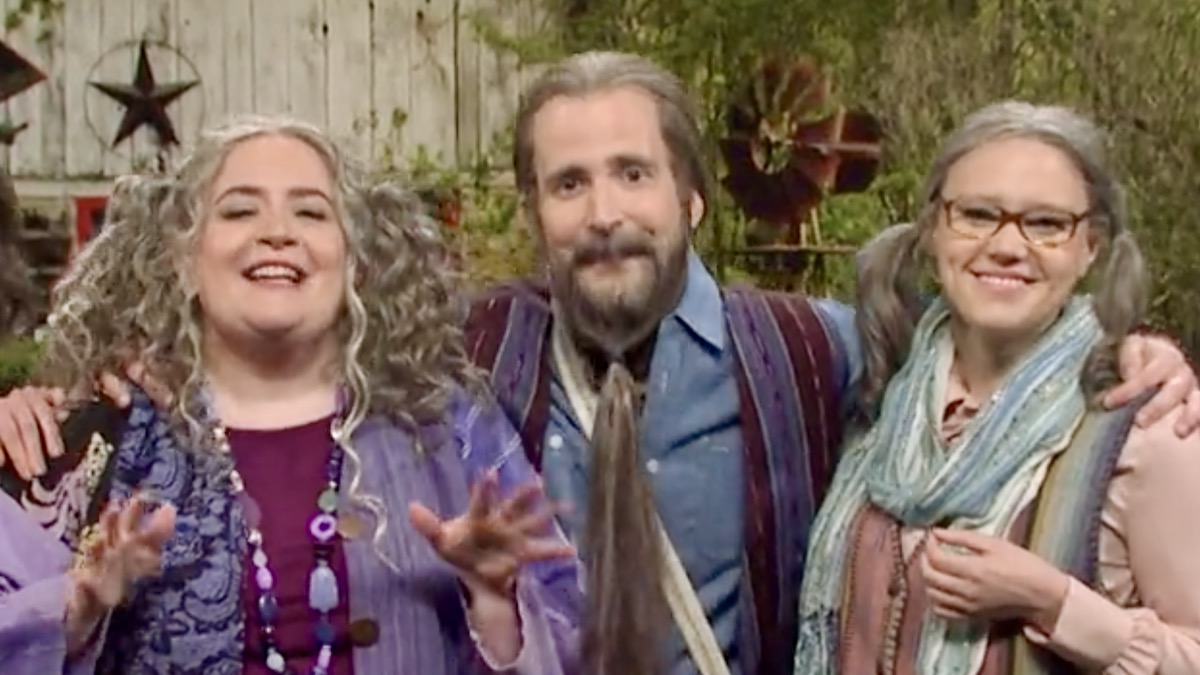 Saturday Night Live bid farewell to several of its longest tenured cast members during an emotional season finale episode on Saturday, May 21st. Kate McKinnon, Aidy Bryant, Pete Davidson, and Kyle Mooney each said goodbye to Studio 8H in their own unique ways.

As the undisputed star of SNL over the last several seasons, it was only appropriate that McKinnon’s farewell opened the show. Specifically, SNL dedicated its Cold Opening to a final reprisal of McKinnon’s long-running Close Encounters sketch, which concluded with her character boarding a spacecraft. “Earth, I love you. Thanks for letting me stay a while,” McKinnon said through tears.

While Bryant was featured heavily throughout the episode, her appearance on Weekend Update served as her formal goodbye. Appearing alongside Bowen Yang as a pair of trendsetters, the two rattled off what’s in and out this season. Towards the end of the bit, Bryant proclaimed, “In: ten nice years,” to which Yang responded, “In: a friend I couldn’t have done this without.” Yang and Weekend Update co-anchor Michael Che then presented Bryant with a bouquet of flowers and both gave her a kiss on the cheek.

Davidson’s farewell followed shortly after. In a full circle moment harkening back to his first-ever appearance on SNL, Davidson joined fellow Staten Island native Colin Jost at the Weekend Update desk. He recounted his initial audition for SNL: “[Lorne Michaels] looked me right in the eye and said, ‘I don’t think you’re right for this show, so let’s screw this up together.’ And that’s exactly what we did, and that’s why people who don’t think I deserve this job shouldn’t hate me because we have so much in common. If anything, I should inspire hope – that literally anyone could be on Saturday Night Live. Seriously, you see a guy bumming cigarettes outside a 7/11 at 2 a.m.? That’s not some meth head. That’s the next Pete Davidson!”

Davidson then proceeded to thank SNL “for always having my back, for allowing me to work on myself and grow. Thank you to Lauren for never giving up on me or judging me even when everyone else was, for believing in me and allowing me to have a place I could call home with the memories that will last a lifetime. Thank you guys.”

Mooney’s departure was acknowledged during the episode’s closing sketch. McKinnon and Bryant spoke fondly of Mooney through his character, a grey-haired pony tail-wearing polyamorous commune leader named Richard. “He’s like if a guy was magic, and we’ll love him forever,” said Bryant. “Nine years ago, we met at a white Buddhist temple for swingers,” added McKinnon. The sketch closed with Japanese Breakfast’s Michele Zauner making a cameo to lead a singalong of Joni Mitchell’s “The Circle Game.”

Watch highlights from SNL‘s finale below.