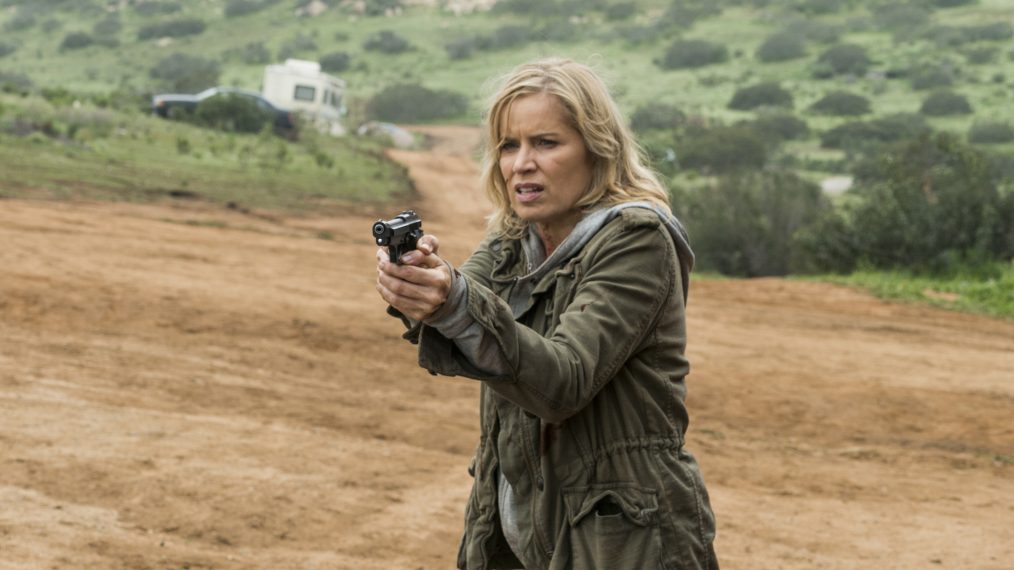 No one’s gone ’til they’re gone!

After years of speculation that she was still fighting and surviving out there in the post-apocalyptic world, Madison Clark (Kim Dickens) is set to reappear on Fear The Walking Dead in the Season 7 finale. She’s also confirmed as a regular for Season 8, so she’ll be around for a good, long while.

In honor of her imminent return, we wound back the clock to reminisce about eight of Madison’s best moments on Fear.

This was the first time we saw just how far Madison would go to protect her family – especially her son. Concerned by how Celia’s (Marlene Forte) beliefs about the dead might negatively influence Nick (Frank Dillane), Madison locked the woman in her own walker-filled cellar and left her to be ripped apart.

When things went bad in LA, they went bad fast. Madison headed back to the school where she and Travis had worked in order to find something that might help Nick through withdrawals, but instead she found her boss turned into a walker. After trying to talk to him – hey, they were a day or two into the end times, at most! – she realized he was no longer human and bashed his brains in with a fire extinguisher. Bad. Ass.

The Season 3 premiere gave us another entry into the “Madison improvises a deadly weapon” saga, as she stabbed Troy Otto (Daniel Sharman) in the eye with a spoon, forcing him to stop torturing Travis (Cliff Curtis) and let her family go. As far as stabbings in the TWD universe go, it’s one of the most creative. And given Troy’s, uh, appreciation for violence, he probably liked Madison all the more for doing it.

In hindsight, this conversation was a long time coming. It was even foreshadowed on the Abigail, when Strand (Colman Domingo) confidently asserted Madison “[wasn’t] a killer.” Little did he know, Madison had taken a life before the apocalypse: that of her abusive father. She revealed that to her children with chaos imminent at the ranch, fully believing she’d have to kill another abusive father, Jeremiah Otto (Dayton Callie), to preserve the peace.

Nick and Alicia (Alycia Debnam-Carey) stared at her in the aftermath, wide-eyed and silent. “My mama looked at me then the way you’re looking at me now,” she said. “I knew that was something I’d have to carry. I’d do it again. I’d live with the look. I’d do it a thousand times, to protect her. To protect you.” It’s a powerful scene anchored by Dickens’ haunted-yet-resolute performance, and we think it’s among the best in the franchise.

A Heart to Heart with Alicia (Season 3, Episode 13) Throughout the first three seasons, plenty of fans felt Madison played favorites when it came to her kids. In-universe, Alicia felt it, too. Eventually, Madison pulled her aside and told her why: their father and her husband committed suicide, and Madison was always trying to stop Nick from being pulled into that same darkness. “I never, ever loved you any less,” Madison said. “I just thought… you were all right.” It was a heartbreaking moment for both mother and daughter as they reached an understanding that couldn’t fully mend Alicia’s hurt. We just hope this duo is able to reunite someday.

A desperate and rage-filled Madison marched right up to Black Hat reservation with Ofelia (Mercedes Mason) in tow, ready to burn it to the ground if Taqa (Michael Greyeyes) didn’t tell her what was killing Nick. “Do you care whether you live or die?” Taqa asked, to which Madison responded coolly, “No, I’m happy to die. Take you with me.” Taqa was so impressed by her bravery that despite the fact they were on opposite sides of the conflict, he not only told her what Ofelia had put in the coffee, he also let her go unharmed. Honestly, we get it. (And now that Madison’s back, can we get Taqa back, too?)

Undoubtedly Madison’s most memorable kill (at least so far), this scene seemed set to change everything between mother and son. As Nick watched, Troy confessed to having led the horde that destroyed Broke Jaw Ranch. Madison expressed her disapproval of that choice by hitting Troy in the head with a hammer, crushing his skull and killing him. Nick had kind of become friends with Troy, so that made him angry; Madison maintained that it was the right call… and even today, a hammer is still her iconic weapon.

At the time, this read like the final words in Madison’s story. While it always seemed like there should’ve been more for her or that she should’ve escaped, if she had to die, going out to save the people she loved felt fitting. Trapped in a stadium filled with flammable walkers, Madison lit a flare and barred herself and the dead inside, allowing Nick, Alicia, and Strand to get away safely. The flames appeared to engulf her, but not before she said, “No one’s gone until they’re gone.” Thankfully, she wasn’t!