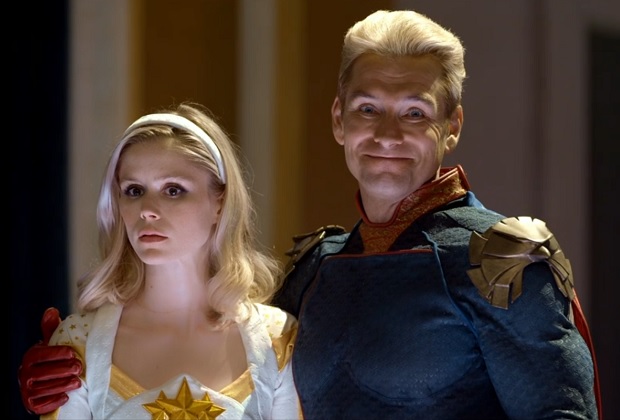 Warning: The following contains spoilers for The Boys Season 3, Episode 3.

The Boys has a new power couple, and it’s one that star Erin Moriarty never expected to be a part of.

In Season 3’s third episode, Homelander made a surprising declaration during a taping of the reality show-within-the-show American Hero: He and his new The Seven co-captain Starlight are in love! #Homelight

Of course, it was all part of a power play by Homelander, who became increasingly unhinged over the course of the season’s first three installments. Even the threat of that plane video couldn’t keep the supe in check. As Homelander put it, if it’s released and he loses everything, then he has nothing to lose. And while he prefers to be loved, he’s OK with being feared.

So while revealing the winners of American Hero, Homelander exerted his power, first welcoming The Deep back into The Seven (surprise!), then declaring himself and Starlight to be a couple (what?!). After getting over her shock, Starlight decided to play Homelander’s game and upped the ante by sealing the announcement with a kiss, while secretly digging her nails into her palm behind her back.

Below, Moriarty talks Starlight’s new role as co-captain, that unexpected liplock and what it all means for her relationship with boyfriend Hughie.

TVLINE | In Episode 1, Starlight becomes co-captain of The Seven. How does that shape her thinking in terms of her own power as the season progresses, and what she is capable of?
She works in an environment where she’s viewed power as something that people take advantage of, and its power has existed in a really toxic way at Vought. But she looks at it as potentially being her chance to finally impart that change and do good within Vought that she’s been wanting to do and make certain decisions that could steer Vought in a better way. So while being really conflicted about it, because here she is gaining status at a corporation that embodies everything she’s trying to fight, she’s wondering if she can, from inside, impart change on the world and on this corporation that runs this immensely corrupt world. The question is, in gaining that power, which is a direct threat to Homelander, is she even able to do anything with that power while constantly being under the thumb of this very threatening, crazy, evil superhero that is Homelander? She sees the power as an opportunity and tries to seize it as an opportunity to the best of her ability, and as the season progresses, we see whether she believes that that position of power is going to, ultimately, help her attain her goals, or if it’s just put her higher up at a corporation that she despises. 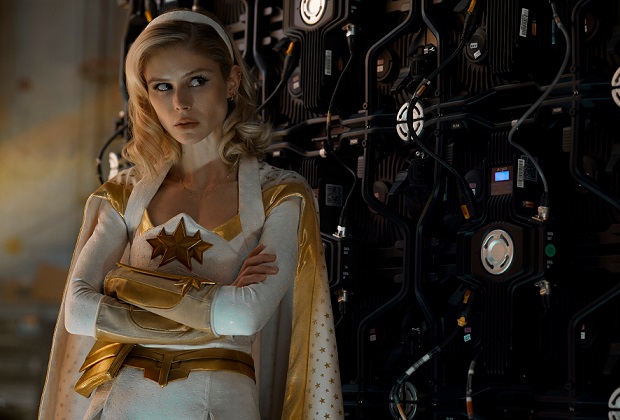 TVLINE | In many ways, it’s kind of a curse disguised as a reward/promotion.
Completely! And I think she gets that. I think it’s painful for her. But if it’s going to do good, and if it means she’s got more power, she wants to try it on for size, and it’s just the question [of] is she going to be able to have impact? Or is it just going to make Homelander blind with rage and make her life harder? It’s a really interesting position for her to be in, for sure.

TVLINE | Homelander is not one to give up power easily, so I imagine this will a very dangerous new dynamic for Starlight.
Exactly! He’d sooner kill the person threatening his power or die himself than give that up. So when Starlight becomes right in his eyeline, in terms of threatening his position and his power, that’s going to result in a lot of repercussions and consequences for her.

TVLINE | Homelander declaring that he and Starlight are in love is so crazy and unbelievable that you kind of have to laugh.
Oh my God! You would never see that coming once you start watching The Boys from Season 1, and it’s insane. When I read it on the page, I didn’t expect it. Then playing it out, it was like oh my God, we’re taking this to places that I never even anticipated, which is great. And then poor Starlight is forced to continue to play the game to a degree that she’s like listen, in her mind, it is just too far. You can only make so many personal sacrifices until you just combust. So it’s insane, and it’s creepy, and it’s just so unexpected. I did not expect that to happen, but it was so fun to play out because it just adds to their dynamic and complicates it even more.

TVLINE | What was Starlight’s thinking in following up that declaration with a kiss?
I think she was looking at him, and her intention was to say like, “Two can play at this game. If you’re going to mess with me, I’m not going to succumb to it. I’m going to stand up to it, and I’ll play this game if you want to.” At that point, she’s still committed to her position as co-captain, and she’s been convinced by Hughie to keep playing the game. So she thinks that it’s what she needs to do to do good, and so she looks at that kiss as two things: She looks at it as her commitment to the role as co-captain, and she looks at it as rising to a challenge that she’s meeting that has been set by Homelander.

TVLINE | Hughie tells Annie to stick it out, so she can keep an eye on Homelander, which is kind of a big ask given what Homelander has put Annie through in the past. How is that going to start to affect Hughie and Annie’s relationship?
Hughie is so well intentioned and loves her so much, but I don’t think anyone could possibly understand how uncomfortable and scary it is to be put in that position every single day, to be by Homelander’s side. So I think she doesn’t feel seen by Hughie, and that while she is yet again willing to go the extra mile and stick with it on the off chance it could help them defeat him, it’s so uncomfortable for her that she feels like there is a lack of empathy coming from Hughie, which is part of what catalyzes some of the complications in their relationship this season.

The Boys fans, what did you think of Season 3’s first three episodes? Grade them below, then hit the comments!