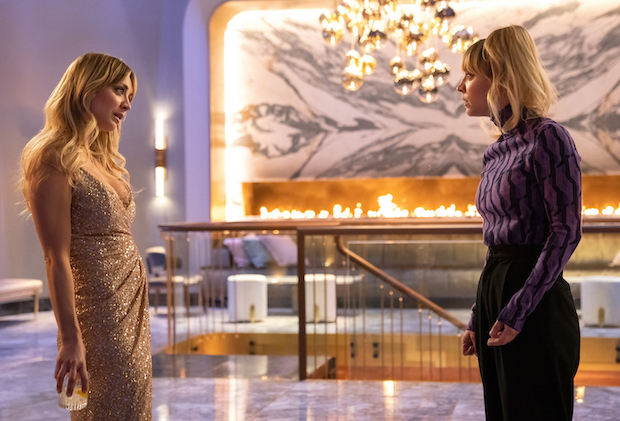 While Season 1 of The Flight Attendant followed the same route as the novel of the same name by Chris Bohjalian, Season 2 of the HBO Max dramedy ventures into new territory.

But not everything has changed. Cassie is still jet-setting across the world as a flight attendant. Only now, she is also serving as a civilian asset for the CIA, keeping tabs on the agency’s marks. But will a mission in Berlin ruin her new life in the City of Angels? Read on for a recap of “Seeing Double.”

CLEAR SKIES AHEAD? | Now based in Los Angeles, Cassie has her life all figured out. She has a house (with throw pillows!), a stable, sexy boyfriend named Marco (Star Trek: Picard‘s Santiago Cabrera), and she is nearly a year sober with the help of her sponsor Brenda (The Expanse‘s Shohreh Aghdashloo). On top of that, she gets to work for the spy agency with her secretive handler Benjamin (Pitch‘s Mo McRae), which provides her the excitement that was lost when she gave up alcohol.

Her latest mission takes her to Berlin, where she is told to simply observe and photograph a man in a hotel – nothing more. However, after a quick run-in with coworker Shane (who drew her into the spy biz), things start to go wrong. Cassie’s rival Jada is lead attendant on the flight, and she is not buying Cassie’s new sober, making-better-choices attitude. Then she nearly blows her CIA cover with new colleague Grace (Feel Good‘s Mae Martin). 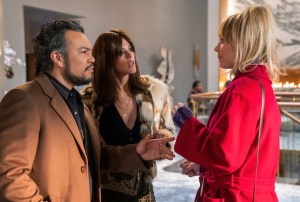 WELCOME TO BERLIN | Personal drama and such near-misses are the least of Cassie’s worries. Arriving at a German hotel, she spots her mark but is interrupted by a seemingly random couple who claim to have been on her flight. However, the two are not as innocent as they appear, as they clone Cassie’s phone without her noticing. She then disobeys Benjamin’s orders and interacts with her mark at the bar, discovering that he, too, is recovering alcoholic, and works as a courier.

Cassie is not the only voyer out in the town tonight. Right above Courier and Blonde Lady’s room is a group of men who appear to be listening in on their activity. Cassie frantically tries to get photos of it all, but is spotted by the men in the higher room, who quickly close their curtains to conceal their operation. Courier then hands Blonde Lady the envelope he picked up earlier, exchanging it for a silver briefcase.

Cassie rushes out to follow Courier but is interrupted by a call from Megan, who appears to be hiding out in some sort of dive bar. She asks Cassie if she got a key in the mail, but has to hang up before Cassie can answer. Cassie follows Courier to his car, which explodes the moment he gets in, knocking Cassie to the ground!

MIND GAMES | Cassie comes to in the hotel, but things are not as they should be. The lobby is empty and dreamlike. Cassie approaches the bar only to find a veritable Council of Cassies sitting around the fire, exchanging stories. While two of the four faces are hidden, teenage Cassie and the pre-Season 1 Cassie are present, complete with the gold dress she wore the night she met ill-fated Alex.

Before she can register what is going on, Cassie wakes up at the exploded car site and sees Blonde Lady strutting by. Cassie finds her way back to her room, which is curiously locked. A friendly housekeeper lets Cassie in, where she gets a call from Benjamin. But before she can answer, she is transported back to the dreamlike lobby. “What did you think? You were gonna find some hot, dead guy here again?” Gold Dress Cassie asks, welcoming her back into her guilty consciousness (which was previously occupied by Alex in Season 1). Gold Dress Cassie questions her counterpart’s efforts to “make better choices,” pointing out that her decisions in Berlin have not exactly been amazing, and pressures her to take some of the edge off with a cocktail.

Cassie answers the call from Benjamin but does not tell him she followed Courier and was at the scene of the explosion. She rushes to catch her flight but discovers that someone stole her luggage and checked out under her name. 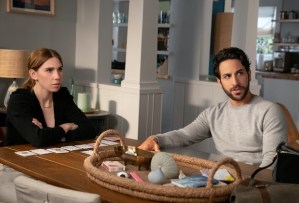 FAMILIAR FACES | On the plane back to Los Angeles, Cassie and Grace bond, but the former’s calm is disturbed when one of the men from the hotel surveillance room – who happens to have a distinguishable milky eye – ends up on her flight under the name Jim Jones. The two run into each other again when they land, but Cassie is able to lose him in the airport.

Finally back in Los Angeles, Cassie is greeted by Max and Annie, who are in town for Annie’s job interview and so Annie can meet Max’s parents for the first time. As the friends embrace, Cassie notices the massive rock on Annie’s hand and proceeds to appropriately freak out. Of course, in her stoic nature, Annie refuses to say the word “engaged,” instead arguing in lawyer-speak that she wears it on “this finger because it only fits on this finger, and Max and I are in continuous discussions about the future and what this ring means in technical terms.”

The reunion is interrupted by the CIA, who summon Cassie down to the field office. There she meets up with Benjamin, who tells her that they know she was at the explosion site and will probably be fired for lying. However, lead agent Dot Karlson (Suburgatory‘s Cheryl Hines) defends Cassie’s behavior, and reveals that Courier was a CIA informant and that the explosion was caused by a “gas leak.” Cassie tries to tell her about the men in the room and the tattoo on the blonde lady, but Agent Karlson is not having it.

As Cassie is leaving the CIA building, she spots Milky Eye but is able to avoid him once again. Back at her house, she finally calls Megan back but gets no answer. Suspicious about Cassie’s behavior, Max and Annie try to get the truth out, but Cassie is able to deflect by blaming it on the Berlin explosion.

Cassie’s missing luggage is finally delivered. While the bag is the same, it is full of items that don’t belong to her, including an Imperial Atlantic flight attendant uniform, a ViewMaster, and a bloody, blonde wig, leading Cassie to conclude that someone is impersonating her!

What did you think of the Season 2 premiere? Grade the episode and leave your thoughts/theories below! And if you want scoop on Cassie & Co, email [email protected].