The Miz & Maryse Open Up About Career Decisions in ‘Miz & Mrs’ Season 3 – CelebrityGossipNow.com
Skip to content 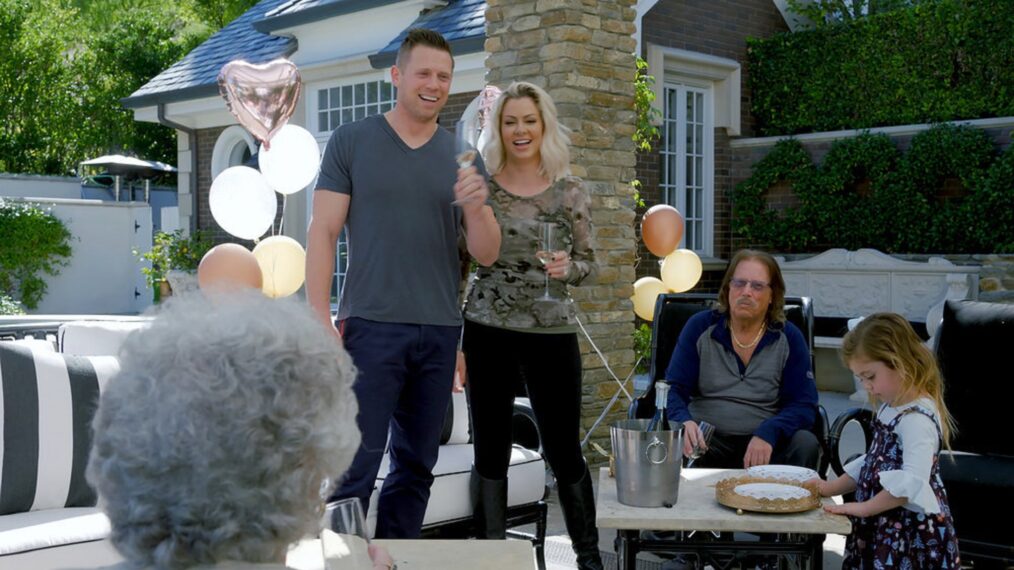 Family is the main event of the Mizanin household as Miz & Mrs returns for season 3. Mike “The Miz” Mizanin and Maryse are back juggling careers and quirky parents while caring for their two toddlers.

Season 3 sees Miz deciding to hit the ballroom of Dancing with the Stars and being seen in a new spotlight. His wife Maryse has her own decision to make when it comes to whether she should step through the ropes of WWE once again.

Ahead of the two-episode premiere, we caught up with the busy couple.

Mike, you were shooting the show while on Dancing with the Stars. How hard was that?

The Miz: It was a lot of hours dancing, and not only in the studio. Then I get home and all I was doing in the garage and in the bedroom was dancing. It was tough.

You seem to have gotten in really good shape.

The Miz: I lost 15 pounds when I was on that show. You were dancing so much you forget to eat. You’re utilizing different parts of the body you never used before. You would think it’s just dancing. No, it’s pretty tough. To get that dance where it needs to be on Monday night, you have to really dedicate yourself 24/7 to it.

Maryse, how challenging was this time for you, especially given that you have two young girls at home?

Maryse: It’s hard, but you do it. I really wanted him to do Dancing with the Stars when he asked. We knew it would be a lot of work. It was actually a lot more hours than I thought. Probably double. I knew we were going to be busy. It wasn’t just dancing in the studio. It was also after. His head was always into it. I’d be having a conversation with him, and I can see him picturing dancing. I’m like, “Are you listening to what I’m saying because your brain is going.”

The Miz: When I’m in a competition I get very competitive. I want to win. I know that if you don’t put everything you have in it, you’ll leave something unturned.

Maryse: He would come home and put his feet in this massage machine. Then he would have his journal. He would write in his journal at one in the morning and have that machine on in the bedroom. It was loud.

The Miz: It was shaking the whole house. But the journal was more or less going over what I learned that day. If you don’t write things down or see it on a video, you’re going to forget what you learned. I would take videos of all my dances and jot down notes that I needed to keep in my head that I might forget on game day. Maryse, how was it documenting your return to the ring?

Maryse: I like to do stories that are meaningful and that I can get excited about. You always do better, and it’s always more fun. And when I get to work with him [Miz], I can’t say no. I wasn’t supposed to do a story with Beth [Phoenix] and Edge. I was supposed to come back as a character on the show. Then the first day back I get asked about us versus them in a tag match at Royal Rumble. It got me excited. I love Edge. I love Beth. I could not say no. That’s what happened.

The Miz: Honestly, she works the highest of calibers. She puts everything she has into it. Not only is she the best wife, the best mother. Whenever she has a goal, she succeeds at it.

Maryse: That’s the part that was scary for me. You have priorities. I thought that if I said yes I would have to put the time into it. You have to work for it. You get to see it this season. The whole process of getting back into the ring and what comes with it. We’re going to Royal Rumble, we think, are we bringing the kids? At first, I thought, sure, we’ll bring the kids.

The Miz: I love our kids to death, but when you’re at work you can’t have your kids running around. You have to concentrate and focus, especially when you have 60,000 people out there ready to boo and cheer you. You’re there to entertain them.

Maryse: It’s on the show, but the night before the Rumble, we were barely talking to each other. People see these things on pay-per-view, but there is so much work that goes into it. We’re so mentally busy.

How have the kids responded to having cameras on them?

The Miz: What’s crazy is when we started this show we didn’t have any kids. Now we’re sitting before you with season 3 coming where we have a four-year-old and a two-and-a-half-year-old. Right now, they just enjoy the lights, the music, and the crowd reaction. They don’t really understand yet what is really going on. I think that will happen in the next couple of years.

A big part of the show is your parents. What kind of hijinks can we expect to see them get into this season?

Maryse: My mom Marjo thinks she got kicked out of the house. She has her own condo.

The Miz: We got her a condo that is fully furnished.

Maryse: A nice condo eight minutes from my house.

The Miz: “You don’t want me here?” No, we want you to spread your wings Marjo! She always finds the negatives in all the positives. What about George Mizanin?

The Miz: My dad puts us through a lot. Whenever he is here, something always happens. When we shot something, some of the people were like, “That’s not real.” No, that is real. That is my dad and who he is. When people watch the show they go, “Your dad doesn’t do that.” It’s funny, my friends from high school who have known my dad most of my life, they know that’s George Mizanin. Lastly, Maryse, you are set to appear for the next Raw on Monday. Is this going to be a one-shot appearance?

Maryse: That is really fun that you asked that. I don’t know. Let’s ask the same question Tuesday morning.

The Miz: She’ll tell you an answer, and the Monday she’ll get there, and it might be a completely different answer.

Maryse: Well, Money in the Bank is coming up, as well as SummerSlam. SummerSlam is a great one.

The Miz: Well, I was the last Money in the Bank contract holder and cashed it in to become a WWE champion for the second time. Could be a good spot for it.