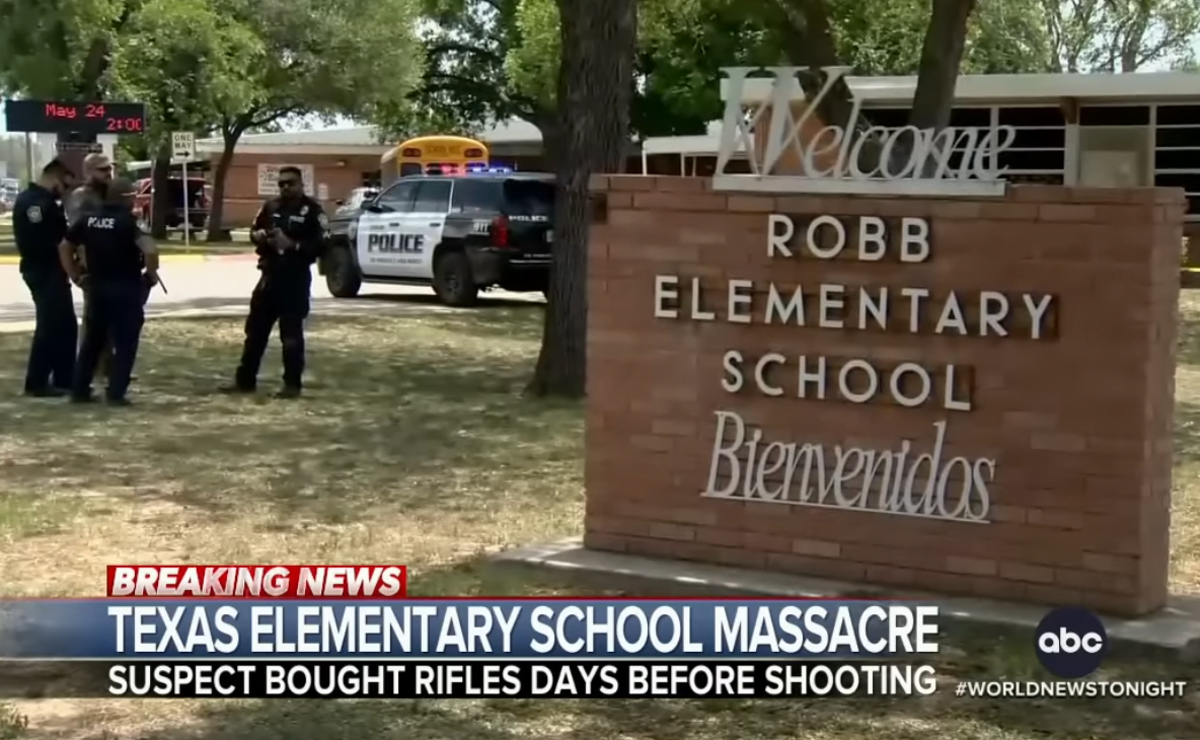 We’re obviously heartbroken by all the news coming out of Uvalde, Texas. But the more we learn about what happened during the horrific school shooting, the more enraged we become…

As we’ve been reporting, an 18-year-old gunman killed 19 children and two teachers at Robb Elementary School on Tuesday. Over the past couple days, more and more gut-wrenching details have come out about what happened inside the school. And almost every new story gives us an example of the police disastrously screwing this up. But this story may be the worst.

A fourth-grade student who survived the mass shooting told local outlet KENS 5 that he was in a room that shared a door with another classroom where the shooter had been during the time of the shooting, saying:

“He shot the next person’s door. We have a door in the middle. He opened it. He came in and he crouched a little bit and he said, he said, ‘It’s time to die.'”

“When I heard the shooting through the door, I told my friend to hide under something so he won’t find us. I was hiding hard. And I was telling my friend to not talk because he is going to hear us.”

While the two hid underneath the table, the boy said he heard the police enter the room and ask anybody if they needed help. They actually told the students to do the opposite of what this boy knew to do. And when one little girl did what they said, she was killed:

“When the cops came, the cop said: ‘Yell if you need help!’ And one of the persons in my class said ‘help.’ The guy overheard and he came in and shot her.”

It wasn’t until after that final death that the cops finally – after waiting so long – came in:

“The cops barged into that classroom. The guy shot at the cops. And the cops started shooting.”

Absolutely horrible. After the shooting eventually came to an end, the student said he came out of hiding:

“I just opened the curtain. And I just put my hand out. I got out with my friend. I knew it was police. I saw the armor and the shield.”

The kid also shared with the outlet that the two teachers whose lives were lost, Irma Garcia and Eva Mireles, had protected and saved their lives, expressing:

“They were nice teachers. They went in front of my classmates to help. To save them.”

This young boy’s horrifying story is just one example of the Uvalde cops’ incompetent, even dangerous response to this tragedy. There have been several eyewitness accounts that have come out describing the lack of effort of the police in this situation, including from Javier Cazares, whose daughter Jacklyn Cazares died during the shooting.

Speaking with the Associated Press, the father said when he learned of the attack and rushed over to the school, he saw several officers still outside the building. When it did not look like the cops would be going inside, Javier said he and some other people wanted to storm inside:

“Let’s just rush in, because the cops aren’t doing anything like they are supposed to do. More could have been done. They were unprepared.”

According to NBC News, videos from the school showed parents and other residents who had showed up outside slamming the cops for not doing anything, in real time. A woman allegedly could be heard in one saying:

A man also yelled at on point:

“They’re all in there. The cops aren’t doing s**t except standing outside. You know they’re little kids, right? Little kids, they don’t know how to defend themselves.”

While the Uvalde police chief claimed during a press conference Thursday that officers responded to the attack “within minutes,” reports have since come out revealing that the shooter had been inside the school for 40 minutes to an hour before he was confronted by police and finally killed by a US border patrol agent. WTF!

Steven McCraw of the Texas Department of Public Safety even said at a news conference on Friday that it was the “wrong decision” to not enter the classrooms fast enough. Though he did say “with the benefit of hindsight” as though there was no way anyone could have possibly figured it out right away.

He also confirmed there were even 19 law enforcement officers outside the hallway – as he said, “plenty of officers to do whatever needed to be done.” Despite having those numbers, they still did not take any action to save the kids and instead waited for room keys and tactical equipment:

“The on-scene commander at that time believed that it had transitioned from an active shooter to a barricaded subject. From the benefit of hindsight where I’m sitting now, of course it was not the right decision. It was the wrong decision. There’s no excuse for that.”

There certainly isn’t. What is even worse is that McCraw claimed officers waited outside while the children repeatedly called 911 and begged for help:

“The belief was there isn’t anybody living anymore and that the subject is now trying to keep law enforcement at bay or entice them to come in.”

An important note amid these details of police frankly NOT doing their jobs and seemingly refusing to put themselves in harm’s way, even to save little children. According to the latest records, the small town of Uvalde has a population of not quite 16,000 citizens. They spend 40% of their annual municipal budget on their police force. So if the cops aren’t going to take action when they’re needed most, what the hell is all that money for??

Furthermore, we have to mention the fact that the police have even changed parts of the story several times this week! For instance, according to MSNBC, reports stated that cops confronted the gunman right when he crashed a car before entering the elementary school. Sgt. Erick Estrada explained to CNN on Tuesday that he “was engaged by law enforcement” but then “was able to enter the premises.” However, the Department of Public Safety’s South Texas regional director Victor Escalon claimed there was actually NO incident between cops and the shooter who was then able to walk into the building with no issues 12 minutes afterward.

Additionally, a spokesperson for DPS told The Washington Post the gunman and an armed school safety officer had fired shots outside the school. The department also confirmed to TODAY that the school officer was armed. But the story changed once again when McCraw told reporters on Thursday that there “was not an officer readily available, armed.”

Now, we cannot help but wonder, which is it? What really went down on that tragic day? There are still just so many questions that have remained unanswered. But one thing we do know? All of these new details are just infuriating to say the least.